Guitar cab impedance and hence, connection can sometimes be a bit of a mystery but is critically important if for example, you’re using valve amps. That’s amps which have a valve power amp. If you have an amp that has a valve pre-amp section and a semi-conductor (transistor) power amp section, then it’s not a big deal.

WHY IS IT SO IMPORTANT TO CORRECTLY MATCH UP CABS WITH AMPS?

BIG DEAL. SO WHAT HAPPENS IF I GET IT WRONG?

If there is an impedance mismatch between a valve amp and its load (the cab that it’s connected to), the transformer in the amp is put under stress. This stress will burn out the transformer, your amp set-up stops working and you’re definitely in for a very expensive repair.

If the connection between your amp and your cab is broken and becomes what’s known as ‘open circuit’, then the same thing will happen. Effectively, your amp’s output has been set to drive a specific impedance. With nothing attached, your amp is trying to drive an infinite impedance; BANG!!!!!

I’VE GOT LOADS OF CABS. HOW DO I KNOW WHAT IMPEDANCE TO SET MY AMP TO?

Like anything, it’s actually quite simple if you remember a few basics. For starters, it might be worth noting the following:

So, let’s have a look at cabs. The simplest cab is the humble single speaker cabinet like a 1 x 12”, for example. With a single 16Ω speaker, the guitar cab impedance is (you guessed it) 16Ω.

'Z' is the engineering notation for impedance, so Zt is the total cab impedance and Z1 and Z2 are the impedances of the two speakers respectively. Of course since the impedance of the individual speakers is the same, the formula becomes quite simple, like this:

So to work out Zt (the overall impedance of our 2-speaker cab):

If you’re still with me, let’s throw in some numbers. Let’s start by remembering that our speakers are 16Ω each:

And of course, 8Ω is the correct answer! The impedance of a 2 x 12” cab comprising two 16Ω speakers is 8Ω. That’s because they’re connected in parallel.

If you're not used to all that arithmetic, it can kind of look a little intimidating. On the hand, if you go over it couple of times, it will hopefully start to make sense.

So, cabs can be treated in the same way as individual speakers although cabs are usually connected in parallel inside your amp... err... with one exception (that I know of) and that the Roland JC-120. Firstly, although it's a combo the speakers aren't powered by one amplifier. There are two independent amps, one driving each of the speakers. Secondly and more relevant to this post, when you plug in additional speakers, they're actually connected in series with the internal speakers.

Remember that the JC-120 is a transistor amp so impedance matching isn't an issue. What it does mean however, is that the load on each amp, will increase when you plug in more speakers, thereby reducing the power output of the whole amp.

Remember that we worked out that 4 x 12 cabs are normally rated at 16Ω? Now consider using two 4 x 12 cabs to make a full stack. Plugging them both into a single amp where they are connected in parallel inside the amp, will make the overall speaker load, 8Ω, just like our very first 2 x 12 example.

2 x 12 cabs work in the same way. Each 2 x 12 cab is 8Ω. Connect two of them to a single amp and the combined overall impedance will be 4Ω so you need to set you impedance switch on the back of your amp, to 4Ω.

As with most things in life and as I've said a couple of times in this post, there are exceptions. As I say, the nice thing about standards is that there's so many to choose from! 🙂

Now then, pictured below is the back of a Marshall TSL122 100 Watt 2 x 12 combo. So is this confusing or what? For starters, the speakers in this thing are different.  Marshall decided to combine a Celestion Vintage with a Celestion Hertitage. Yeah, I know people do that but I'm not a fan, to be honest. Anyway, the point is that each speaker is 8Ω. On top of that (and the second point), is that they're wired in series to create 16Ω. Well that kind of makes everything I've just said, seem like a complete and utter waste of time. 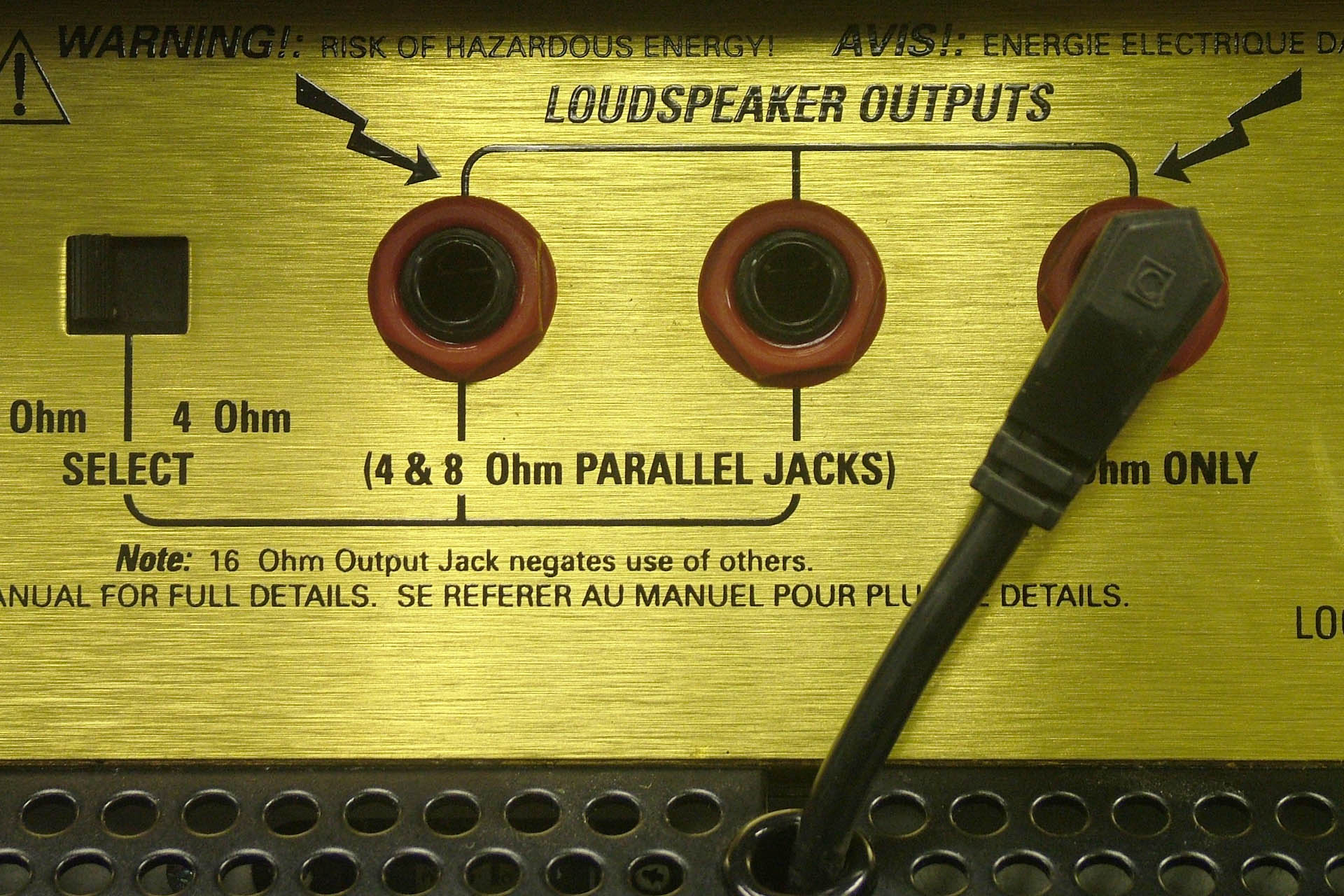 On this particular amp, the on-board speakers are plugged into the (default) 16Ω speaker output, the markings of which are obscured in the picture, by the lead. Plugging into this socket, disengages the other sockets. If you want to use external cabs, you need to unplug the lead going to the on-board speakers, plug into one or both of the other sockets and if your cab impedance is 4Ω or 8Ω, you'll then need to select your impedance appropriately. If you've got a 16Ω cab, you have to unplug the lead going to the built-in speakers and plug your cab into the 16Ω output. That's really confusing and personally, I can't see a way to use the on-board speakers and an extension cab!

I'm not a fan of the TSL series but this kind of thing really makes me back off!

Then there's the Roland JC-120 which I've mentioned a couple of times, earlier. Not a valve amp so impedance isn't at all a big deal but... it's rather interesting that anything plugged into the speaker jacks around the back, is put in series with the on-board speakers. You have to remember that this thing came out in 1979, so what was Roland thinking? On the other hand, who'd want to mess with the sound that comes out of a bog-standard Roland JC-120? It's gorgeous!

So the bottom line is that you need to always check that your guitar amp impedance matches your cab impedance. Read anything that's written on the back of your amp and on the back of your speaker cab. Make sure that you read the manual and if you do get stuck, then you can always just call me!

Oh and one more thing;