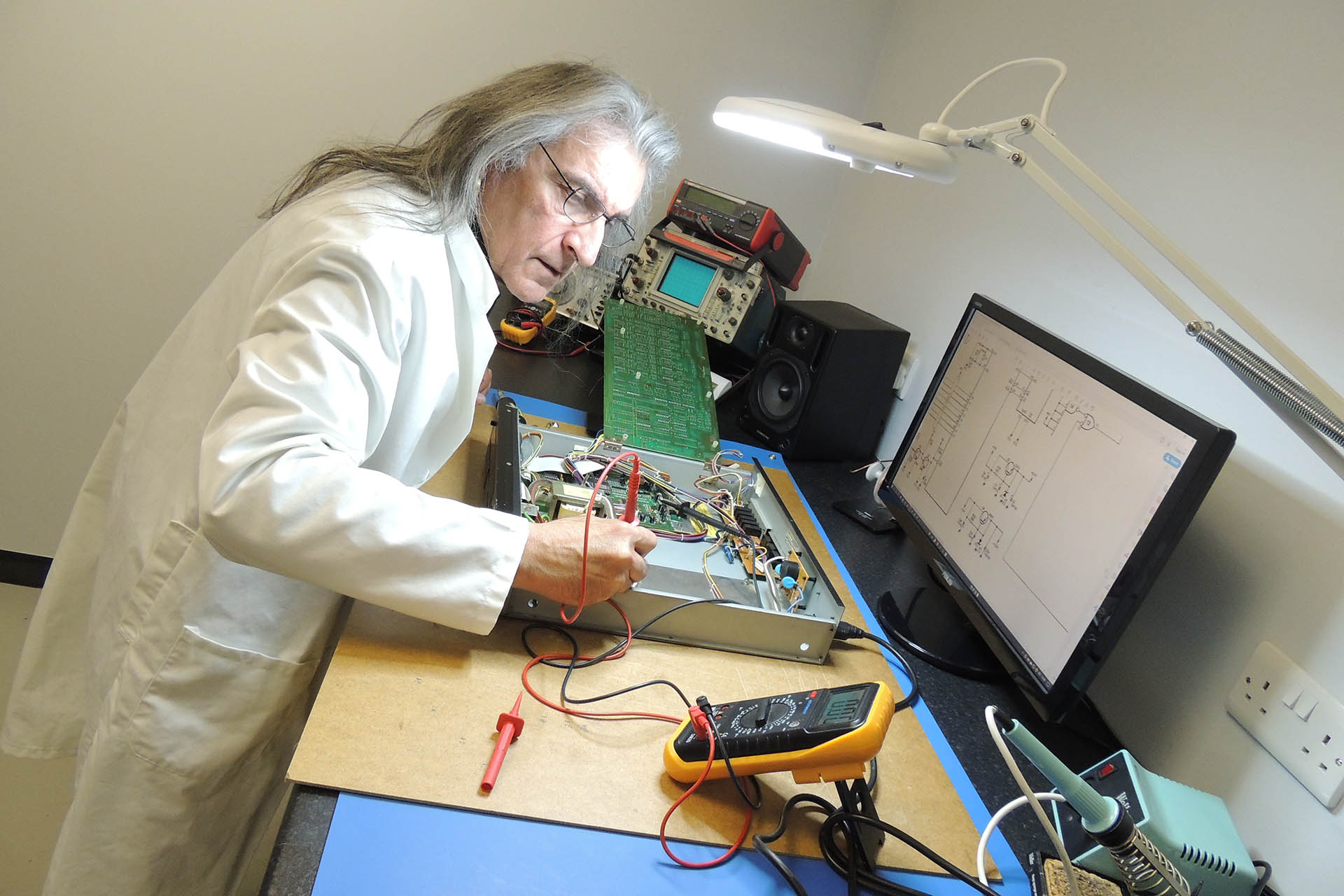 The MKS-70 is basically the rack version of the Roland JX-10 keyboard synthesiser, which itself is essentially two JX-8Ps. Also known as the Super-JX, the JX-10 and the MKS-70 are famous even today for their rich, analogue tone and pristine sound quality. At this point I need to make something clear; the Super-JX is not actually 100% analogue unlike for example, one of it's well known predecessors, the MKS-80. The oscillators are in-fact, digital. So when I refer to 'analogue' tone, I'm referring to just that, the tone.

Check out more details and some sounds here and here.

Anyway, the customer said that it wasn't powering up properly with just a flash briefly appearing on the display and then nothing. Well, let's see if we can get this ol' girl singing again..

Apart from being a giant classic, the MKS-70 like the MKS-80, has hinged circuit boards which means that it opens up quite nicely. Having said that, if you need to get at the 'CPU' board (the service notes refer to this as the Assigner board, for some reason), you really do need to disconnect and remove the lower analogue voice board.

Checking voltages before anything else, I realised very quickly that I had a major problem. The voltages on the power supply were all about 25% more than what they should be. Eek! Hope no serious damage has been done.

I'll keep you posted on this fix but please bear in mind that I'm respecting the COVID-19 lock-down so it may be a while before I'm back.

The power supply is a really clever and well thought out design for the time but I don't think the Roland R & D team had any idea that their machines would still be making music over thirty years after their conception. There's a small voltage monitor chip on the power supply which, when it fails, sends the +/-15 V rails to like +/-22 V. Unfortunately the +5 V rail for the digital stuff has a dependency on the +15 V rail so if that freaks out, then so does the +5 V supply.

I decided to change all the major components on the PSU including transistors, capacitors, bridge rectifiers and of course that frigin' voltage controller IC. Okay, so now power is good.

Well the voice-boards turned out to be fine but the CPU or assigner-board, was seriously not happy. The code was trying to run but not getting anywhere. My worst fears an' all that... This was not going to be a straight-forward Roland MKS-70 repair!

The assigner board on this Roland MKS-70 is indeed kaput. Having got to know Guy Wilkinson of SuperSynthProjects over lock-down, Guy came over when things calmed down and we both agreed that although laborious, one coarse of action would be to swap out all of the ICs but... as many will know, there's one IC that can't be replaced and that's IC2, the 63H149 gate array.

The Roland 63H149 is used in a lot of Roland keyboards and modules, right up to the S-10 and the D-50. In many machines, including the keyboard version of the MKS-70, the JX-10 the 63H149 is mainly used as the keyboard scanner but unfortunately, it's also quite connected to other devices in the MKS-70.

Guy came up with an idea and is currently in the process of designing a 'replacement' for the 63H149. This isn't going to be a drop-in 80-pin device like the 62H149 itself but something that will kind of 'bypass' the chip's functions and fool the MKS-70 into thinking that the gate array is there and functioning normally. If we can do this, it'll be quite a break-through and will potentially save a lot of MKS-70s.

An exciting but time-consuming project, it's going to take a while but be sure that I'll definitely keep you posted.

Please don't hesitate to contact me if you have a sick Roland MKS-70 or any other vintage synth.