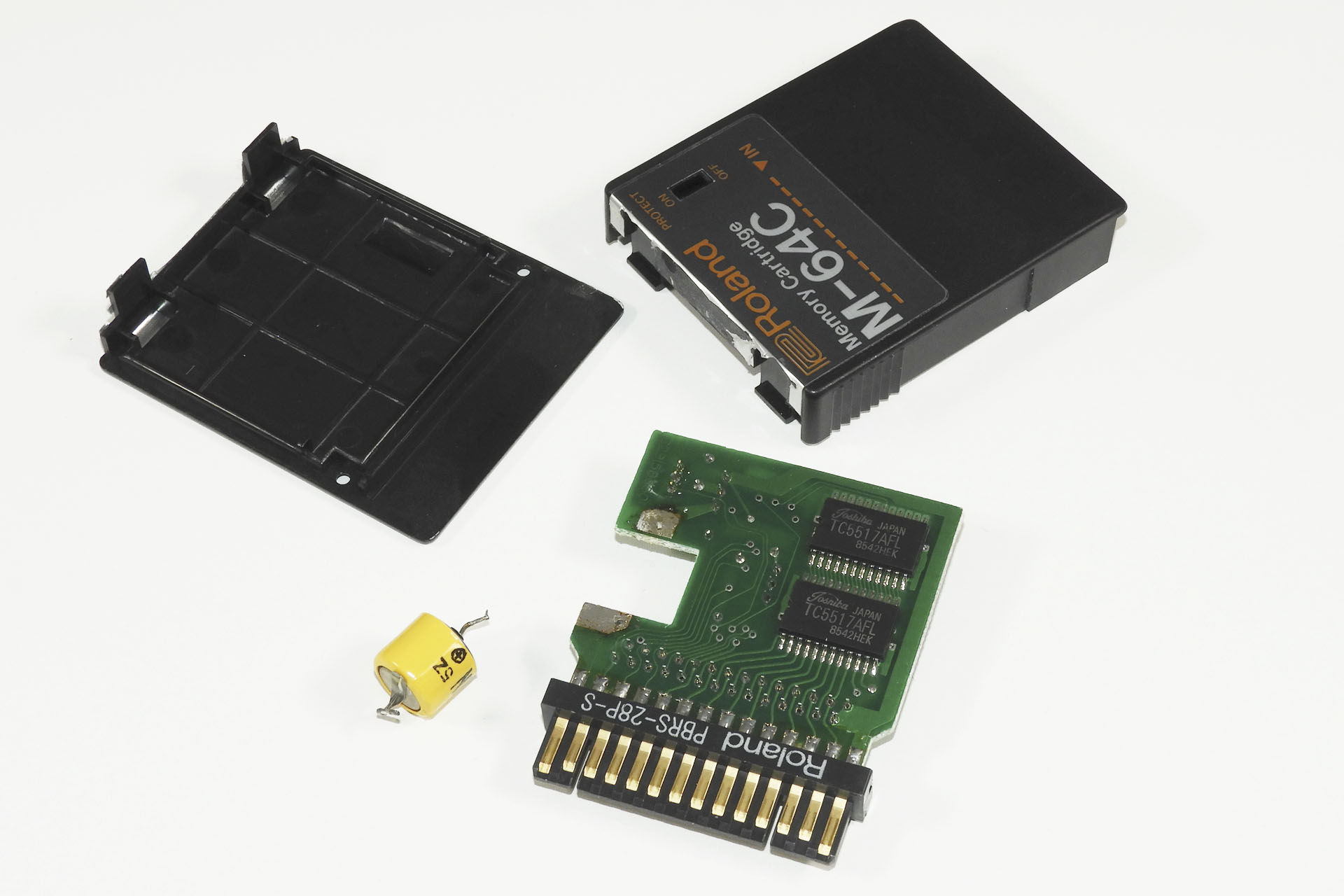 The humble Roland M-64C memory cartridge which was used to store data on soooo many Roland synths, drum machines and other gear, back in the day. The problem is, that just like the memory inside your favourite eighties synth, the memory in the M-64C is retained using a small battery. These cartridges have stored our patches for decades but the internal battery won't last forever. Here's a little post on the Roland M-64C battery change procedure.

Yes, I know there's quite a lot of clever people out there, who have made some awesome  replacements which have huge memory storage and no battery but many of us still have M-64Cs and if all you have to do is change a battery once every couple of decades, then why not?

The case of the M-64C is held together with only two screws but... you'll have to remove the label to open it. YouTube videos suggest that the label is cut but actually, that's not necessary. The original Roland label is printed on to a type of self-adhesive metalized medium and NOT anything that's paper based. Hence, if you're careful, you can peel it off and there's no need to destroy it. The customer who supplied the example pictured in this post, unfortunately didn't know that! 🙁

Once open, make a note of the orientation of the battery. The positive terminal is facing the top of the cartridge, furthest away from the edge-connector. 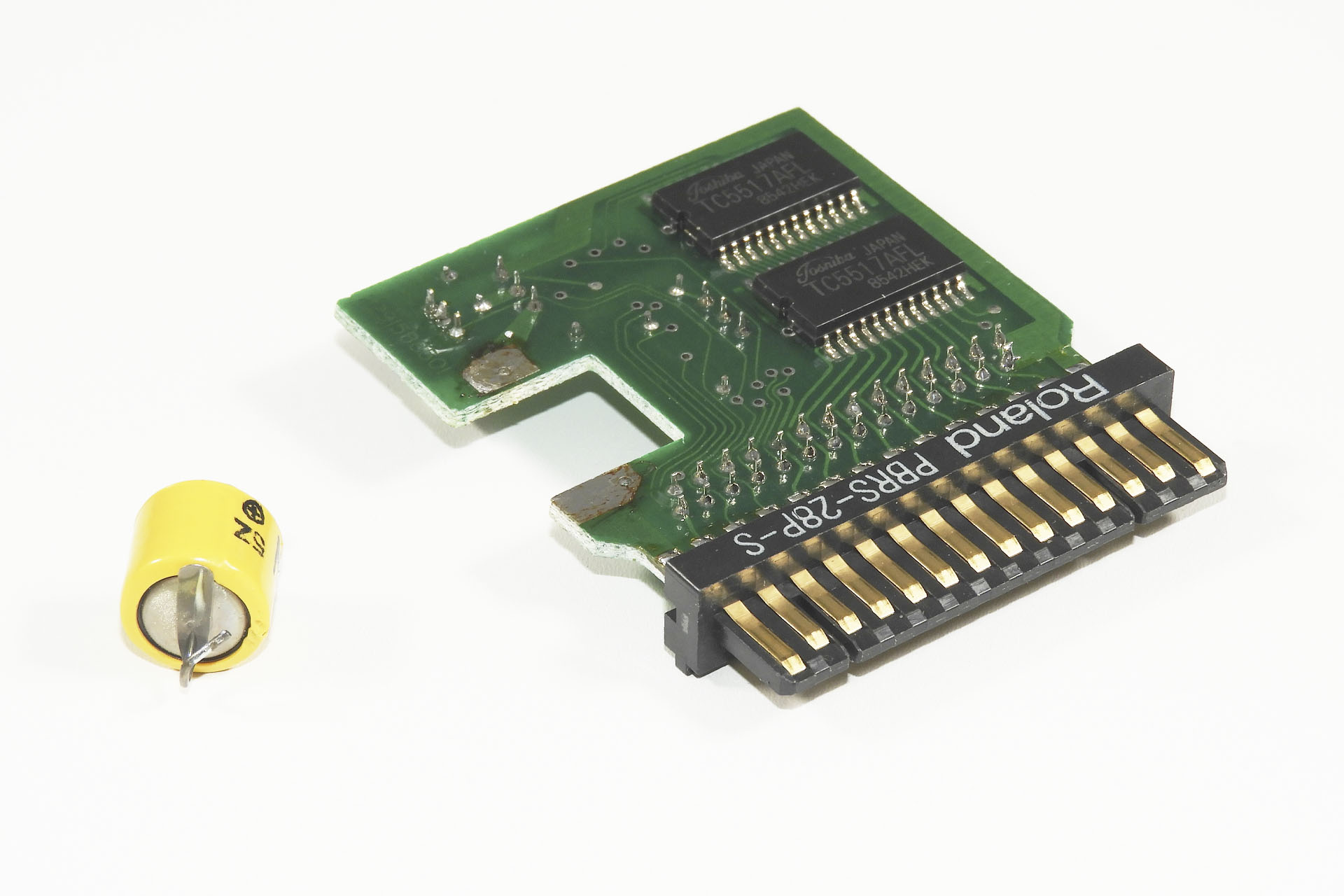 The battery is a CR-1/3N which is (still) readily) available although it might be challenging to find one with solder tags. Yes, that's right. The CR-1/3N normally turns up WITHOUT solder tags and if you're like me, then the idea of soldering directly to a battery, isn't particularly appealing.

Performing a Roland M-64C battery change isn't as difficult as you might think and as mentioned, the CR-1/3N battery is still available. The annoyance however, is that you might have to scrap the label. Hey but don't worry. Half-an-hour with a ruler and a little Adobe Illustrator magic and....

I'm currently designing a replacement self-adhesive label for the M-64C which I will make available soon.

If your M-64C label is a bit tatty, then watch this space. 😎

I got these back from the printer today!!! 😀

After more than three decades, the hard plastic from which the enclosure is made, has become very brittle and it doesn’t take much to break the screw pillars that secure the enclosure to the front metal chassis.

The data cartridge slot assembly comprises two halves. The back half has a female contact strip which mates with the male contract strip in the cartridge. It’s soldered to a small PCB. Long screws attach this section to the front half which has the flap.

The front half in turn, is secured to the metal front chassis via two M3 screws (one on top right and one at bottom left) that go through two small plastic flanges which are part of the front cartridge slot assembly.

The problem is that when inserting a data cartridge, you’re pushing the cartridge slot away from the front chassis and the small plastic flanges through which the screws pass that secure the front half of the slot assembly to the front panel, are stressed.

The most obvious fix is to use a type of cyanoacrylate (super-glue) or epoxy adhesive to repair the broken flanges. Only thing is, those flanges often break into several pieces. It’s a nightmare! If your data cartridge slot is intact, then you really (REALLY) want to avoid this ever happening.

Back in 1984, Roland should have designed the assembly such that it is properly supported from the rear.

Well, my V06 bracket continues where Roland left off and does just that! Designed to sit neatly on top of my Aurora Board B (or Board Bx), the V06 provides a physical resistance behind the data cartridge slot, thereby reducing the force on the front slot assembly screw flanges, the only things that are holding the whole data cartridge slot in place.

The very front of the assembly, is designed such that it 'rests' on the MKS-80 front panel slot cut-out. This means that so long as there's something sold behind the assembly (like the V06), it's not going to move from side-to-side, let alone backwards and forwards.

If the data cartridge slot in your MKS-80 is just fine and you’re interested in Aurora, then you really should consider fitting the V06 bracket. Instead of relying solely on the enclosure’s two screws and the integrity of the screw flanges, the V06 will provide substantial protection against breakage.

I wish I thought of the V06 when I designed Aurora but all this stuff is kind of an evolutionary process. The Aurora Board Bx for example, didn’t happen until several months after Aurora was released. The two power supplies I’ve subsequently designed for other vintage synths however, both included my on-board Live Forever battery mod, from conception.

When I did come up with the idea of V06, I wanted something that could be retrofitted, a solution which existing Aurora customers could purchase and easily install themselves.

With just a M3 (5.5mm) nut-runner and no disconnecting of internal headers or soldering, once your MKS-80 is open, V06 can be installed in a couple of minutes.

So now, Aurora offers the following long-term solutions for the Roland MKS-80:

If you have already bought Aurora and would like a V06, please just get in touch.

Back in the eighties, Jed Allen and I used to work together at Roland (UK), so imagine my surprise when he called asking if I could fit an Aurora into his MKS-80!

Jed's machine was in really good condition apart from the data cartridge slot which was very broken. In fact Jed told me that it had been bust for decades and that no one could fix it. Hmm... So while I was installing his Aurora, a little deep thought and I came up with the idea of the V06 bracket.

Jed kindly agreed to me keeping his machine for a few more days while I designed and had made the V06 (hey, what are friends for) and of course he became my very first V06 customer.

Apart from the pictures of the intact data cartridge slot assembly, all the other pictures are of Jed's MKS-80 and the V06 that went into it. And YES, that's Jed's Roland Juno-60 in the background, which I serviced at the same time. 🙂

If you already have an Aurora board fitted and would like to protect the data cartridge slot assembly in your MKS-80, you can buy V06 now...