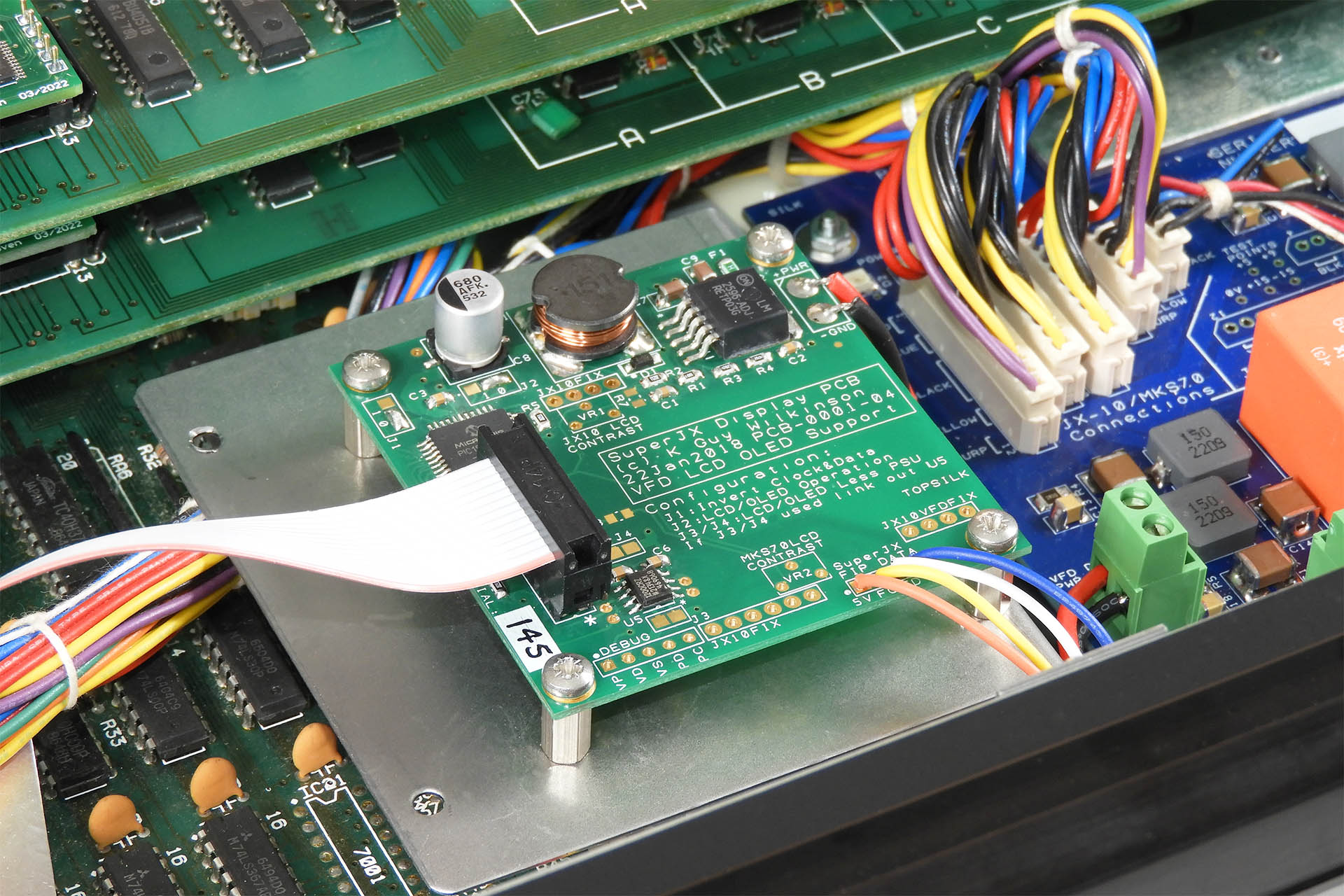 After fitting a couple of Guy Wilkinson's VFD modules and realising that the controller PCB needs to be mounted to the rear of the MKS-70 front panel by drilling holes and using hex-spacers, I figured on trying to re-purpose my old V02 bracket. By adding three more holes, the V02B mounting bracket for the MKS-70 VFD module was suddenly born! 🙂

When I was installing a lot of Fred Vecoven's original PWM kits, I designed a bracket to make things easier. The V02 could only be fitted to MKS-70s that had Guy Wilkinson's P0004 power supply as it occupied the space previously taken up by the transformer. My original V02 however, removed the necessity to drill holes into the voice-boards to mount Fred's PWM daughter-boards.

Fred Vecoven then released his fabulous digital PWM upgrade which easily mounts to the MKS-70 voice-boards in place of the original MKS-70 counter chips. My V02 wasn't necessary anymore. 🙁

Guy Wilkinson's VFD module for the Super-JX is amazingly popular and rightfully so. Retaining a good degree of visual familiarity when compared to the original display, it's a great bit of tech and a super upgrade for these old machines.

The GU-280 comprises two components; the actual VFD (display) and the controller-board. Guy Wilkinson's recommended installation requires holes to be drilled into the MKS-70 display-board (to mount the VFD) and according to Guy's installation instructions, the front-chassis, facilitating the mounting of the controller-board to the rear of the front-chassis. While the former can't be avoided, the latter isn't exactly a prospect that everyone will relish. Using my V02B however, means that at least you won't have to drill holes into your MKS-70 metalwork!

IMPORTANT: I know I've already mentioned this but I feel I need to be quite clear that the V02B bracket occupies the space taken up by the MKS-70 transformer. Hence, it can ONLY be used if you have a P0004 power supply installed.

When mounting the controller-board to the back of the front-chassis, only the top two screw points on the PCB can be used, as the front-panel ribbon cable running along the back of the front-chassis, prevents drilling of holes lower down. With the V02B, all four screw points are utilised, making for a more secure fixing. The VFD controller-board isn't going anywhere!

By the way, if you don't know about this, then you're missing out! Hey, you can read all about Guy Wilkinson's GU-280 VFD module for the Super-JX here.

My V02B mounting bracket for the MKS-70 VFD module will be available in my on-line store soon. I just need to get a few V02s drilled out! Don't hesitate to contact me if you're interested, though.