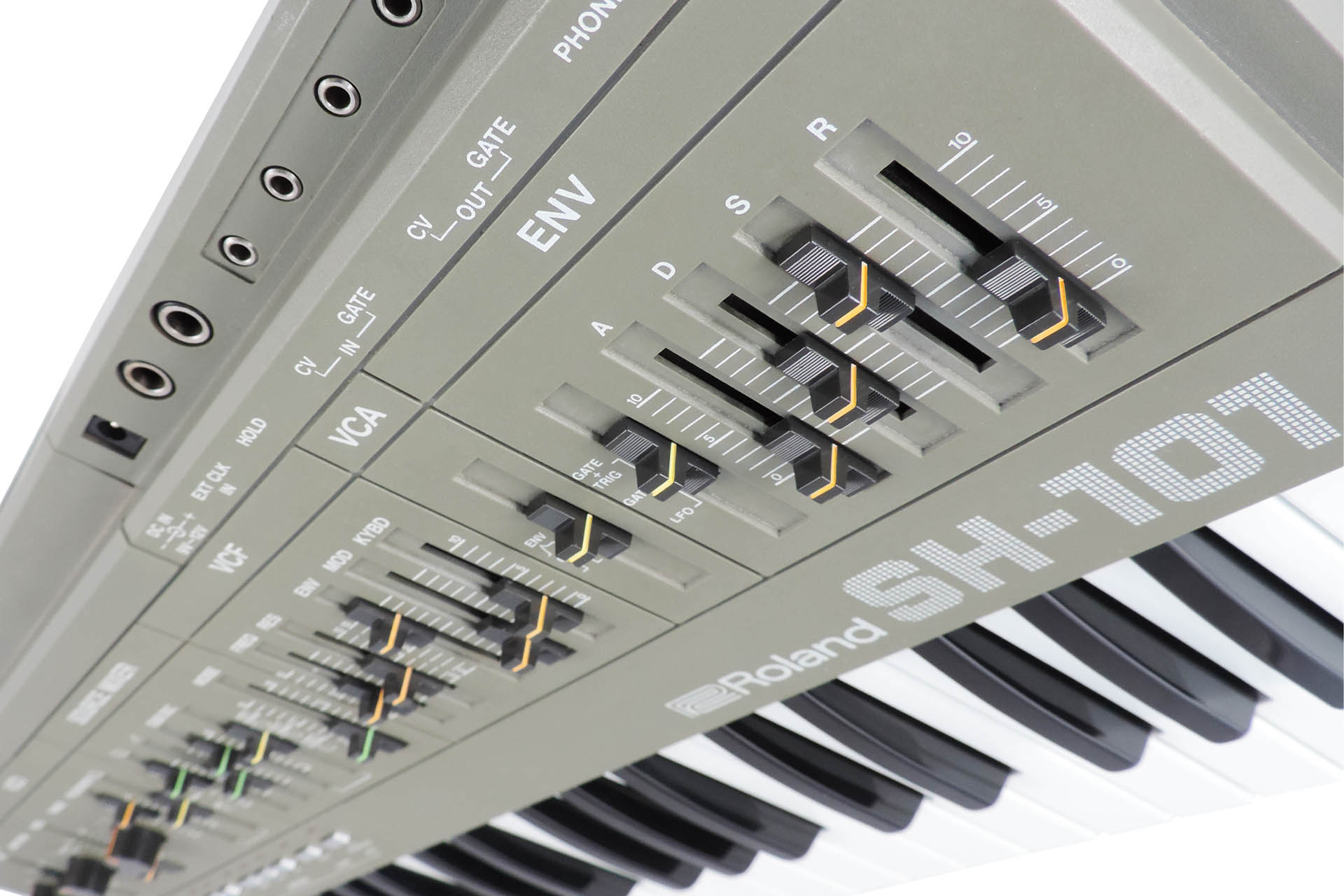 Recently, one of my regular customers put his Roland MPG-80 up for sale, having acquired a Retrtoaktiv MPG-8X. I’ve always, always wanted a MPG-80 to (obviously) go with my MKS-80 but I’ve never seen one in the kind of condition I’d like. Dan’s MPG-80 however, was pristine so I made him an offer which he conditionally accepted, the condition being that I provide him with a Roland SH-101 service.

Dan told me that he’d picked it up at a knock-down price but although cosmetically things seemed okay, some sliders weren’t working properly, some keys were intermittent as well as similar problems with power. Hmm… Okay, let’s have a look.

Well, when I took this thing apart, I was shocked to see the dust and grime within. On top of that, it had sustained fluid damage and from what I could tell, twice!

This SH-101 was completely full of crap! It was clear that this poor ol’ gal had been kept in a smoker’s environment. The pads that cover the switches, just crumbled. That’s right. Tobacco smoke doesn’t just discolour, it reacts with certain materials, making them stiff and brittle.

It was no surprise then, to suss out why some keys were intermittent and why some sliders had quite poor performance. Dan, this is a little more than a standard Roland SH-101 service, mate!

I stripped the whole machine so as to wash the knobs, buttons, slider caps, keys and even the plastic top-case. With the afore mentioned exposure to smoke, I was very concerned that the keyboard contact strips would break as I removed them but I got lucky.

There were a few dry joints which were to be expected and some of the sliders couldn’t be cleaned and therefore required replacement.

While I was at, I also cleaned the sockets hoping that they would be okay. Dan supplied me with a power switch which I fitted but I also changed the DC input jack as the original seemed lose and let’s face it, after thirty-something years, why not?

After a gruelling seven hours, Dan’s SH-101 was back together again, so time to fire up. The machine switched on first time. Playing around the the DC input, power now was stable. Although I had sound, the HOLD function was stuck on. This is a relatively common problem and is often caused by the HOLD jack socket being stuck open. I’d already checked the sockets and quickly traced the source of the issue to a dry-joint that I had missed.

After an extensive testing of all functions, it was time to flip the machine over and recalibrate. As it turned out, things were quite good and I ended up not doing too much at all.

It’s unfortunate that the plastic pillars used to secure the metal bottom-case to the top-case, are so fragile. During my thirty years of fixing SH-101s, I haven’t yet found a way to cost-effectively and reliably repair these. Fortunately, so long the majority  of them are intact, it’s not too much of a problem.

One of the pillars that secures the metal bottom case to the keyboard chassis was missing and the other had an incorrect self-tapping screw rammed into it at some point in its life, which has completely ruined it. The original pillars are very hard to come by and with a couple of the internal plastic pillars broken, it was important to ensure that the bottom-case is properly secured. I therefore fitted brand new M3 PCB spacers to the keyboard chassis, in place of the original pillars. Of course, I also had to dig out a couple of nice, shiny black M3 machine screws. It all ended up very secure and looking very tidy.

Kept near a heat source at some time, the battery compartment cover had warped slightly. The deformation was subtle but resulted in the cover sitting ever so slightly proud of the top of the top-case. Not too big a deal, in fact it’s hardly noticeable. I was tempted to gently heat the cover to see if I could make it straight again but these things are so fragile, I decided against it.

There’s a lot of talk on-line about the infamous Roland SH-101 discolouring. The SH-101 was released in three colours; red, blue and grey. ALL versions discolour and no one really knows why. Exposure to ultraviolet (sun) light seems to be the most common opinion but my own SH-101 has been kept in an artificially lit, smoke-free environment for most of its life and is now more pink than red! I can understand why people blame UV, however. Removing the battery compartment cover reveals  the ‘original’ colour of your SH-101 suggesting that everywhere else which is of course exposed, will be discoloured by ambient UV. Oh well, just one of those weird mysteries of life, eh!

Another slightly annoying issue with the SH-101 is that it's very GROOVY!!!!! Yes, that's right. Those nicely aesthetic lines cut into the top-case add to the SH-101's cool look but they also gather all sorts of dust and crap over the years. Even if kept in a nice, clean environment, the grooves in the SH-101's top case do get dirty and getting it out can make a Roland SH-101 service a little longer than anticipated. 🙁

The brittle plastic, the weird decolourisation and the dirt gathering grooves in the top case don't of course detract from the SH-101's attributes. That classic analogue, mono-synth sound and the pure ease with which it can be manipulated, are what the SH-101 is really all about and perhaps decades after its launch, the niggles now simply add to its cute character.

Anyway, at long last, this Roland SH-101 now looks, feels and sounds fantastic. Nice and shiny, smooth and responsive controls and a solid keyboard, it's almost like new! It's always really exciting for me, when customers come over to collect their gear and I know Dan's busting to check out his refurbished Roland SH-101. 🙂

Launched in 1983, the humble but amazingly well-known and popular Roland SH-101 is pre-MIDI not that many seem to care! Being equipped with CV however, means that the SH-101 can be controlled by another source and as many of my customers will know, my favourite MIDI gadget / upgrade manufacturer, Kenton Electronics, offers a couple of options to to get your SH-101 controllable via MIDI. The SH-101 MIDI CV kit for example, is installed into your SH-101 and although requiring holes to be cut into the case for MIDI sockets, it does mean that you won't have another box floating around.

Kenton also makes a range of stand-alone CV / MIDI converters like the USB Solo, Pro Solo Mk 3 and Pro 2000 Mk 2. These gadgets are very fast and accurate and  don't require any modifications to your synth's case. I've already mentioned that I've always been a big fan of Kenton's products, so if you do want to get your SH-101 connected, then I strongly suggest you check out their MIDI / CV converters, here.

As well as owning a SH-101 myself, I've worked on hundreds of them over the years and know it inside-out, so if you've got one that's in need of a service or if it just needs a little TLC, please don't hesitate to get in touch. 🙂