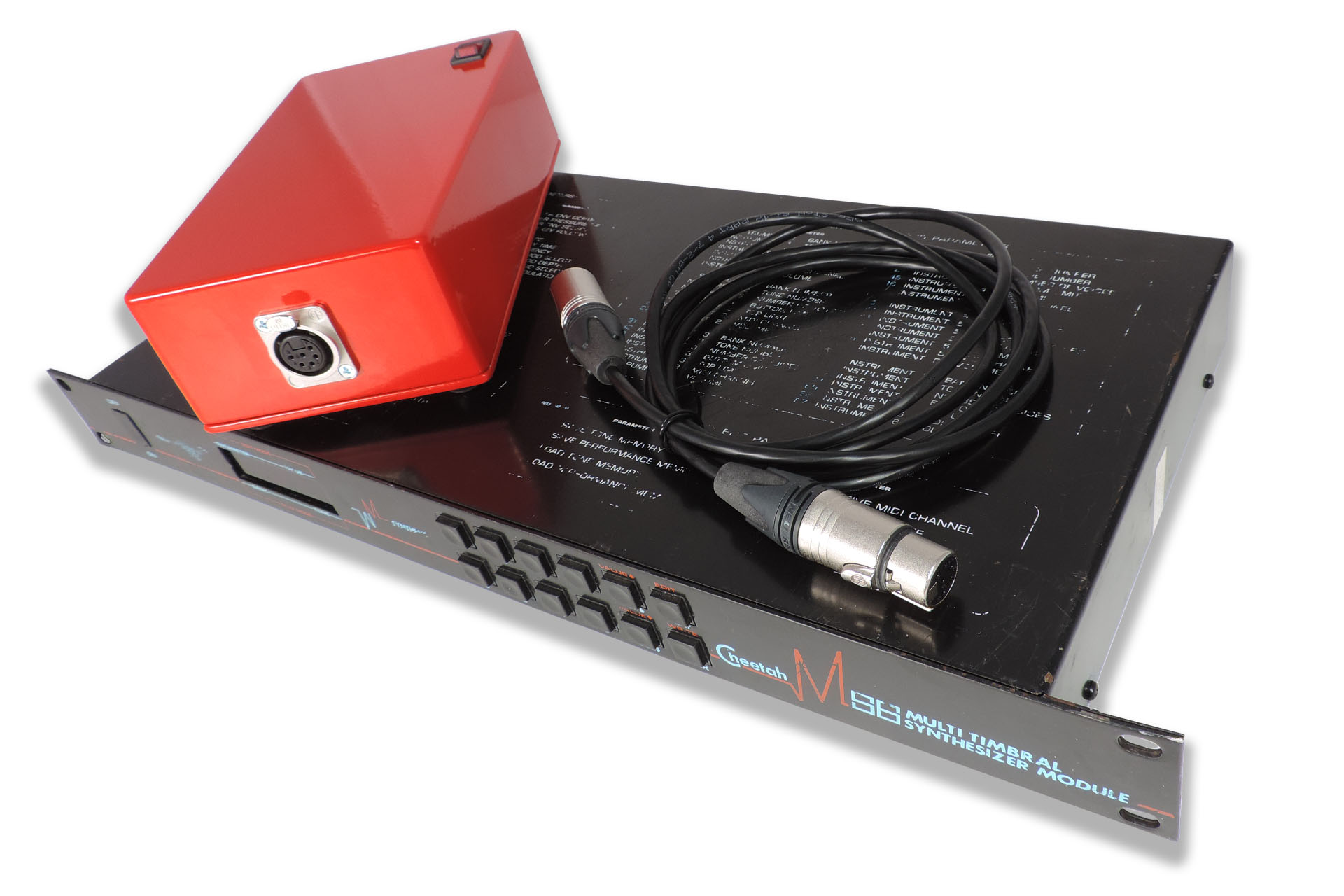 Just before Christmas 2020, I got sent a SoundLab SST-19 guitar pre-amp and a Cheetah MS6 synth module. Both needed power supplies. The SST-19 was immaculate and the customer was confident that it was working (when it had a power supply, of course). You can read all about that here soon. The MS6 however, was a different story all together. The customer told me that one day it just went bang. In fact, it tripped the electricity supply to his house! After a brief conversation via e-mails, he sent me his machine requesting a complete Cheetah MS6 power supply build.

I was told that the machine was working prior to the bang but of course I had no idea if the unit had been damaged by the fault. It was a gamble and there weren't too many resources available for this thing, either. Here’s a list of useful stuff that I did find:

Readable schematics were also thin on the ground and when I did find a copy that was reasonably okay, that’s all it was, a schematic with very little other technical reference.

To speed things up in the long run, I spent a couple of hours cleaning up and organising the best schematics I could find. Hoping that my efforts will be helpful to someone else and my small contribution to the the Cheetah MS6 community, my reorganised (and readable) schematics can be downloaded here. 🙂

So, where were we? Oh yes... The unit turned up and I took off the lid. Ah! So, someone’s been in here before. Three of the four regulators had been replaced. They’d been attached to a thin aluminium strip which had then been glued to the inside of the case and I'm sorry but the soldering was atrocious! After taking the board out, it was obvious that this box had sustained fluid damage at some point in its life. Hmm… looked like I had my work cut out. Oh and the original firmware had been swapped out for the Maad KM 3.0 custom version. Sceptical at first, after some research, I have to confess that I've only heard good things about this new code. 🙂

Anyone who’s familiar with the Cheetah MS6 will be aware that the power supply is well, bloody awful. It’s not uncommon for example, for the case to go live. Yes, you read correctly. The transformers (yes, there two) apart from being underrated are quite unreliable and the original heatsinking is totally inadequate.

My initial approach to the project was to build an external box which would house two uprated transformers and then provide a suitable connection from the box to the MS6. The latter part would require a hole or two to be drilled into the rear case of the MS6.

There are four regulators supplying +/-5V and +/-12V. The backend was such that I could remove the original transformers and drop connections to the main PCB where the secondaries of those transformers come on to the board. Since the supplies were complimentary, each utilised a centre-tap. I found a suitable enclosure all-be-it, a little larger than I initially had in mind and began plans for the metalwork company.

While that was going on, I cleaned up the PCB, getting rid of as much sign of the fluid damage as I could.

Next was the post transformer part of the power supply which as I’ve already mentioned, was a real mess. The PCB seemed quite fragile around the rectifier diodes, capacitors, etc so I had to be careful. While I was in design mode, I knocked up a drawing for a proper heatsink.

Well, I took the stripped-out case, the enclosure for the external power supply and my drawings to Lenton Engineering in Watford and a couple of weeks later, I got the call informing me that everything was ready to collect.

The transformers, switches and connectors all fitted into my external enclosure, perfectly so if nothing else, I would end up with a groovy dual-voltage AC power supply. 🙂

The heatsink also fitted perfectly. It took me a minute when measuring, to realise that the distance between the TO-220 mounting holes was an imperial half-inch and NOT 12mm or 13mm!

I’d already made the cable that would connect the external box to the MS6 so all that was left to do was to drop in the actual connector and then wire it to the main PCB.

So, all was done pretty quickly and it was test time. As usual, I cleared a big space, just in case it all went bang... again. Well, it didn’t. In fact, nothing happened at all for a few seconds. While the unit was still on, I quickly measured voltages and all looked good; +/-5V and +/-12V. Then characters appeared in the display but not as expected. All that was shown was ‘FE’ which was flashing and every now-and-then, some random stuff. I had read on-line that this could be an initial boot routine. Indeed, there was no voltage on the memory back-up battery. The other issue was that the buttons on the front-panel were totally unresponsive.

After a few minutes of being powered up, I noticed that one of the multiplexers was seriously hot, so I switched off. I replaced the CD74AC138E and tried again. Wow! It all fired up! It still seemed to go through some kind of initialisation sequence after displaying 'FE' again but this time, only for a couple of seconds.

I hooked up a MIDI keyboard and attached the output to my mixer. Hey, I’ve got sound. More than that, all the voices were working. This was all quite relief.

While I had the opportunity, I decided to implement my Live Forever battery mod.

This required a slight modification to the battery back-up circuitry as the original battery was a rechargeable Ni-MH. I was dropping in a lithium battery which I really didn’t want the MS6 to charge when it was powered on!

Once that was done, I tried again. You know what? This thing doesn’t sound too bad. Of course there's better but you have to bear in mind the price bracket of this box when it first came out.

The power supply in these machines is notoriously bad. In fact, I’ll go so far as to say “it’s not a matter of if but when it'll blow”. On top of that and as has been proved by the customer of this unit, they don't need to fail 'quietly'. This is a real shame as the synth is actually really quite good with six analogue voices and even multitimbrality. It’s also a shame that the MS6 has an old-style Ni-MH battery. If not charged regularly, there’s a significant chance of this leaking… all over your main PCB!

So, if you have a Cheetah MS6 that you love dearly, please don’t hesitate to contact me regarding

In my humble opinion, I think it's worth it but please do something before it blows up... and trips your house electrics!

I've now built quite a few of these power supplies for customers who just love their Cheetah MS6 and have managed to work out a price. The following is everything I did to get to a reliable and safe solution and for which I do NOT charge:

When working on your MS6, here's what I do and what I charge for:

To do the whole job (excluding metal work, of course), easily takes a couple of days and I simply can’t charge for all of that. If I did, this MS6 power supply would cost more than the MS6 itself!

So after a bit of arithmetic, I’ve decided that although it’s more than many (including me) would like, 430 GBP sounds fair. It covers my costs and leaves me a little for the labour involved in assembly and final testing. Please remember that Plasma Music Limited is VAT registered so that price in the UK is ex. VAT. 🙁

Since posting this article however, I'm truly humbled by the number of enquiries I've received and how many of those enquiries have turned into customers trusting me with their units. In fact, after having done two or three, I decided to design a label for the power supply.

Today, I've received another MS6 with the customer wanting the works. This prompted me to update this post.

I'm delighted that MS6 owners are finding this page and responding to my advice to do something before it's too late. These are really lovely machines with a classic eighties sound. Don't let them die!

Working by myself on things like valve amps and dodgy old synth modules like err... the Cheetah MS6, is sometimes concerning as I often run the risk of  electric shock and of course, there's no one there to assist if things go bad for me.

I've currently got three MS6s with a forth due in shortly. The owner of tonight's machine didn't want my external power supply and after the repair, while doing the final tests, I got hit... the big ZING. Ouch! Straight off the case, no less. Yes, you read correctly; off the case. As many Cheetah MS6 owners may be aware, this is an annoying MS6 issue.

It took a while to isolate things and make the machine safe but guys, I can't emphasise just how bad the power supply is, in these machines. PLEASE GET IT SORTED!!!!!