So in case your Marshall JMP-1's memory gets screwed up, if you just want to start from a clean slate or you've just changed the memory back-up battery, here's the Marshall JMP-1 factory reset procedure.

WARNING: Implementing this procedure will permanently delete all user-made changes to any patches.

While you're here, you may find it useful to know how to dump the entire memory of your JMP-1 to a sequencer or sysex package like MIDI-Ox or SEND-SX.

I  hope this Marshall JMP-1 factory reset procedure helps a few people but if you get seriously stuck, just message me. 🙂

If you want to read more about what I do with JMP-1s, like general service and repair, finding a permanent solution for the skipping data entry knob thing, sorting out the humming transformer issue and offering nice, classy replacement knobs, then please check out some of my other posts: 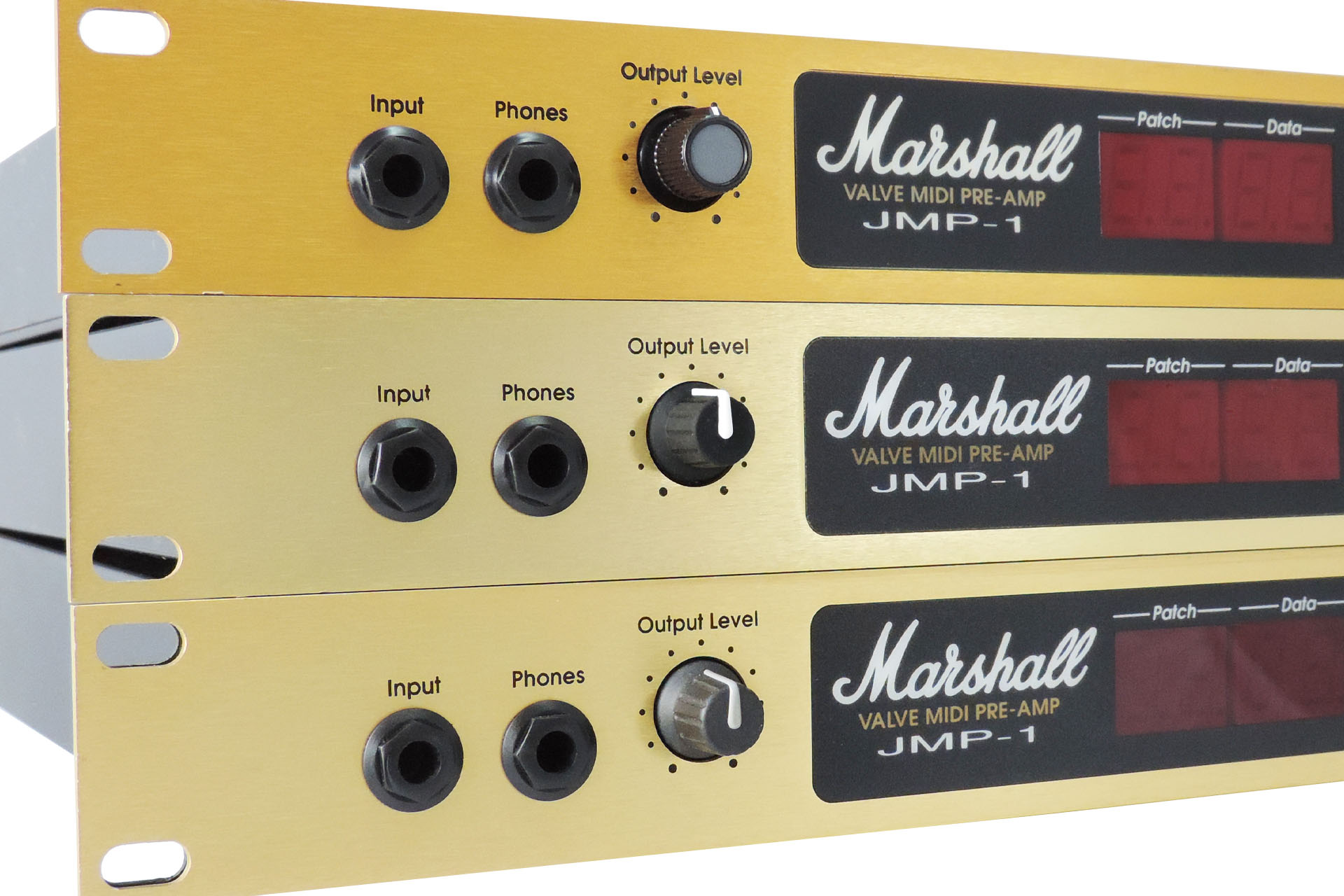 Apart from service and repair, I sell a few bits 'n' pieces for the Marshall JMP-1 which you may find of interest. Check out my on-line store to find out more.

At last!!!! 😀 My PML-TX01 replacement (and upgraded) transformer for the Marshall JMP-1 is finally here! Running much cooler and producing considerably less hum than the original TXMA-00014 my PML-TX01 is an upgrade worth considering. 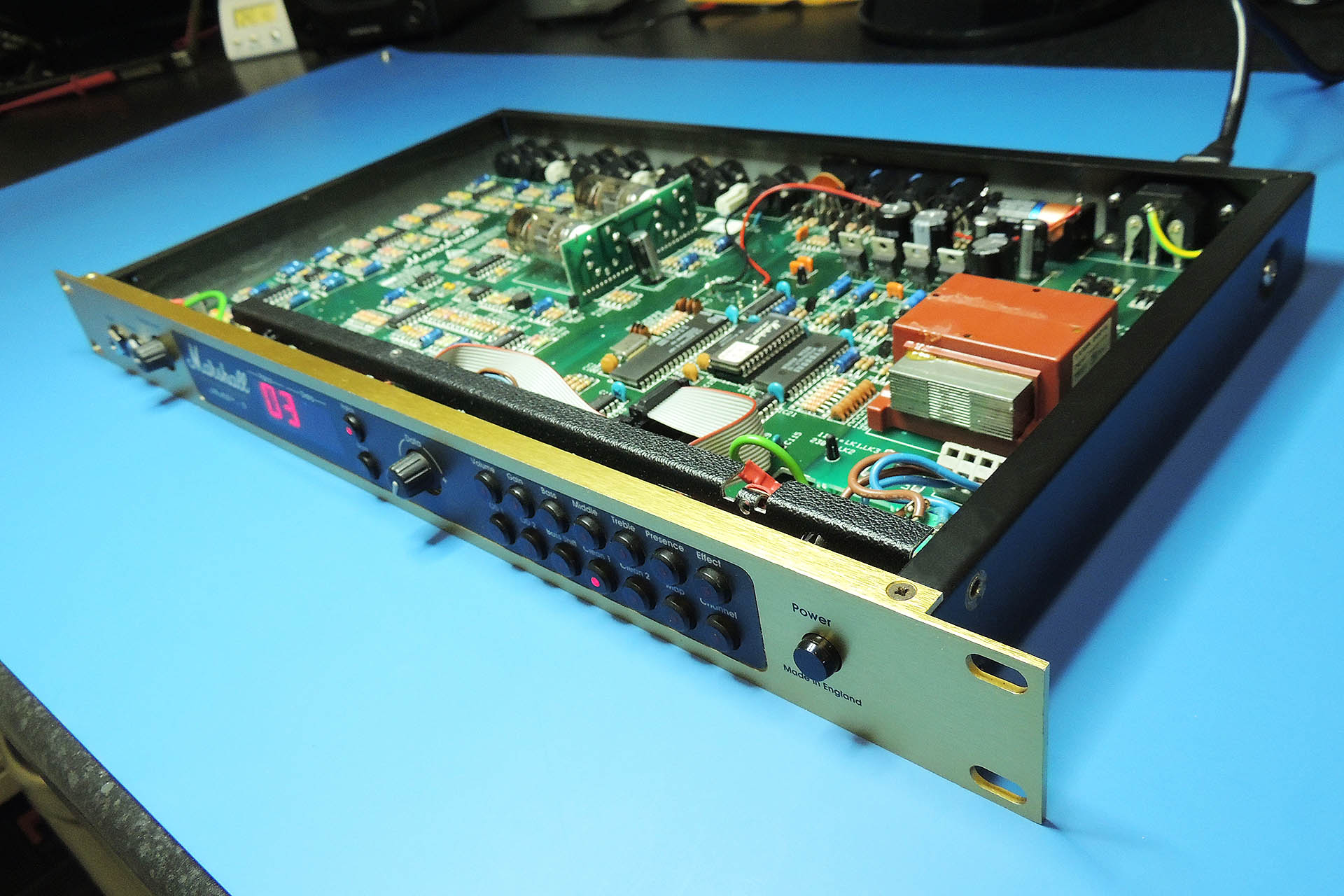 I’ve changed the valves and power supply capacitors, cleaned up the metal work and implemented my ‘Live-Forever’ battery mod’. The original battery is mounted bang in the middle of the main PCB, so you really don't want this to leak.

An early  MIDI valve pre-amp although following the likes of similar pre-amps like the ADA MP-1, the Marshall JMP-1 has always been a really under rated bit of kit, despite the fact that named artists such as Billy Gibbons (ZZ Top), Phil Collen (Def Leppard), Iron Maiden, Megadeth and many more, still use them even today. In production for well over ten years, also says something about this little gem.

The JMP-1 is not a modeler like modern stuff; it’s the real thing, just with MIDI. Run into a valve power amp (or two), it just sounds amazing and the quality of the speaker emulated outputs is definitely good enough to go straight into the board or your DAW.

With most of the distortion being generated in the semi-conductor domain (some of which is highlighted in the image below), many purists might shy away from this beast. 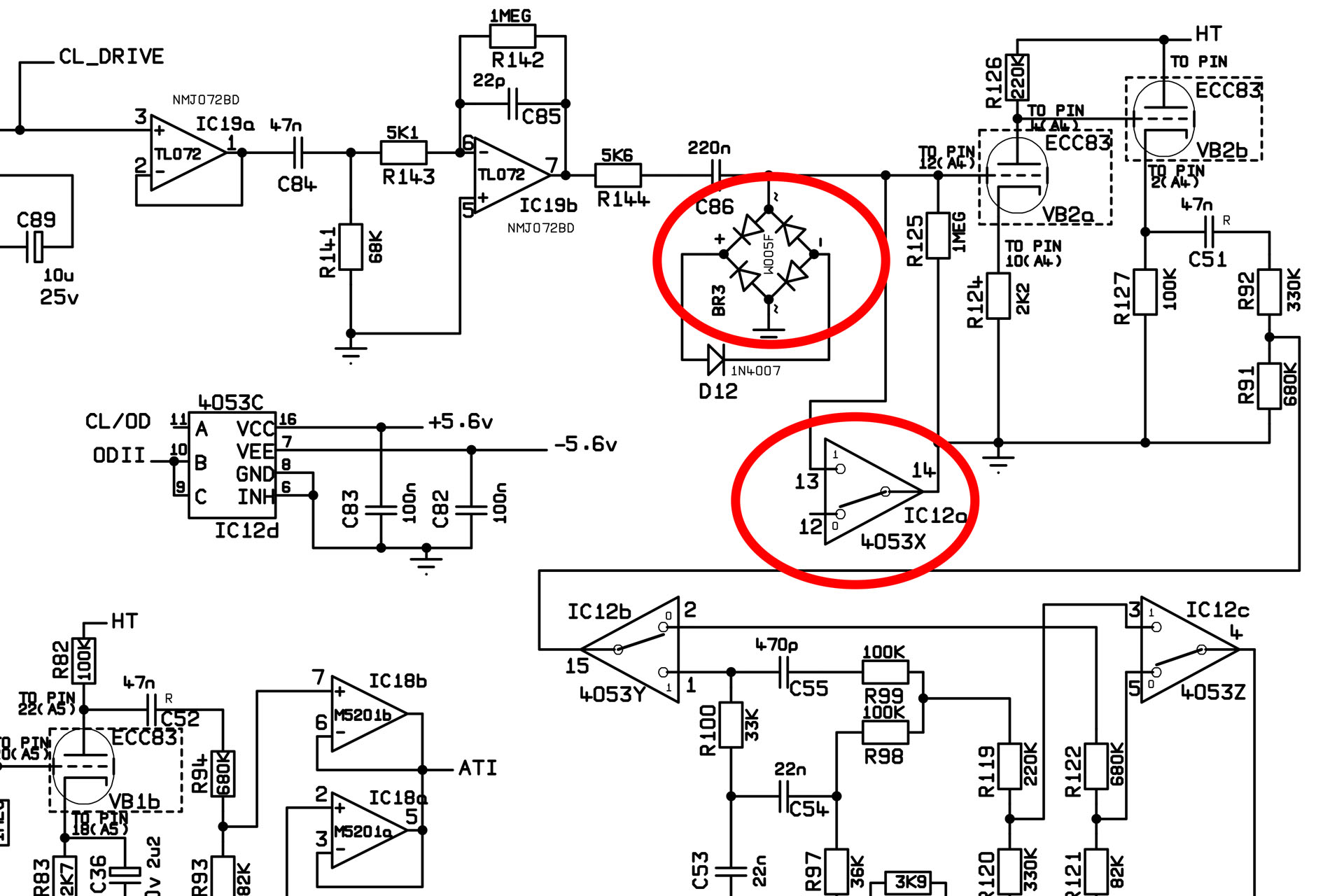 On the other hand, classic Marshalls such as the legendary Silver Jubilee series and the monstrous JCM900 Dual Reverb, also use semiconductors to produce some of their distortion tones.

Lots of JMP-1s hum. This doesn't come through the audio outputs but it can be annoying and I've been trying to get to the bottom the cause for years.

Now, instead of looking at the JMP-1, I'm going to look at what the JMP-1 is plugged into… 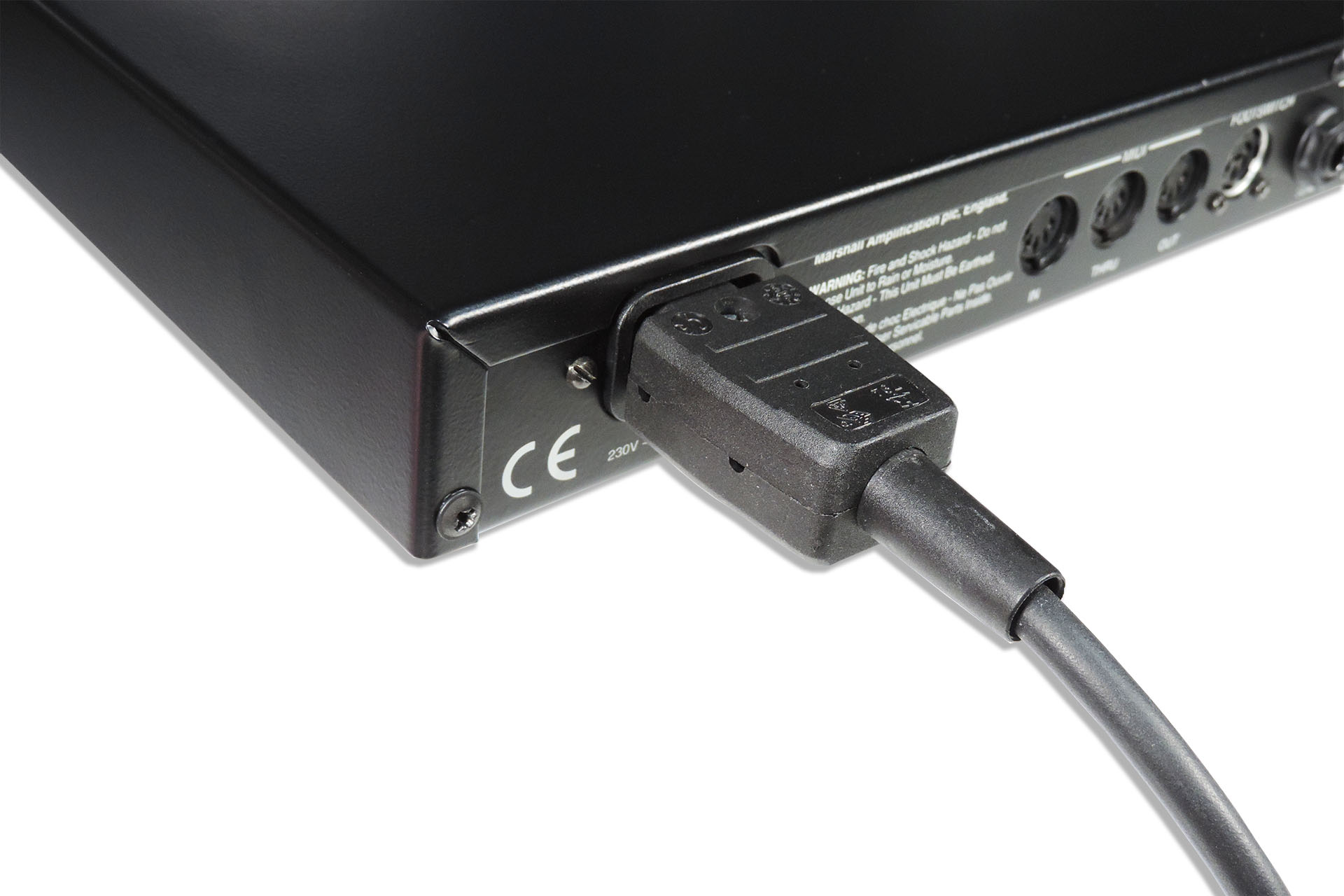 We all know that mains voltage is AC (alternating current). The voltage varies between 100V and 240V depending on where you are in the world. The frequency also varies and can be either 50Hz or 60Hz. We convert this AC voltage to DC (direct current) to power appliances, gadgets and other systems that now dominate our lives. So why is the supply AC and not DC, then? Well, the answer to that is a little involved as there isn’t a single reason. Predominantly however, it’s a matter of safety. If you are in contact with a mains supply (eek), the alternating nature and the frequency of the supply gives the human body enough time to react and pull away. There are other reasons to do with energy but safety is the main reason that the electricity supply is AC.

Unfortunately, it’s not pure AC, though. There’s a DC element present in the mains which has actually grown over the past twenty years or so due to the fact that the number of appliances that use what’s known as half-wave rectification has increased. I won’t go into just why half-wave rectification dumps DC on the mains suffice to say that it can be an issue for some devices.

“So how does that affect my Marshall JMP-1?” I hear you ask.

Well, the other downer is that some appliances contain components that are particularly sensitive to the DC offset on the mains supply and it just so happens that the transformer in the Marshall JMP-1 is one of them. 🙁

Anyone with a little electrical know-how will now wonder how that can be. Transformers are inductive components and so filter out DC. Yep, that’s absolutely correct and in fact the DC that’s on the mains doesn’t get through to the rest of the power supply in the JMP-1.

What the DC component can do however, is saturate the core of the transformer, thus causing the laminates to oscillate. The gap between the top of the transformer and the inside of the JMP-1's top case is very small so you can guess what happens. That's why the hum disappears when you remove the top-case!

What pointed me in this direction was that after being on for about an hour or so, the laminates on the transformer get seriously hot. I mean SERIOUSLY hot. The JMP-1’s regulators however, don't. In fact, they don’t even have any additional heatsinking. This paradox was intriguing. I concluded that the transformer heats up as a result of oscillation. As mentioned, the heat is substantial and the transformer is heavily stressed as a result. Over time, this will reduce the life of the transformer. I'm afraid it's just a matter of time before the transformer fails. 🙁

I should mention the obvious; the JMP-1 has got a couple of valves in it! Although running at about 300V, much higher voltage than the semiconductor parts of the analogue circuitry, they consume very little current and hence, the supply for the valves isn’t regulated. The valve heaters run at about 6.3V and although they ‘heat’ (obviously), it’s not normal to regulate the supply to the heaters, either.

Familiar with DC offset on mains being a problem on high-end audiophile equipment, all the evidence seemed to be mounting up. 🙁

You can suppress the hum with cushioning between the top of the transformer and the case but this will only keep the transformer from dissipating heat that's generated as a result of the problem and hey, it doesn't actually fix things, does it?

If asymmetrical voltage supply is indeed the problem, then the only real and proper solution is to get rid of the DC component all together.

I'm pretty determined to get to the rout cause of this and will keep everyone posted on how my pursuit for the quiet Marshall JMP-1 progresses.

I've also developed something called Eclipse; a bounce eliminator which can be fitted by anyone with a little technical know-how and which gets rid of the data entry knob skipping thing! You can read about Eclipse here.

A thousand apologies, Plasma People! What with the flood back in August and COVID-19, I've been a bit distracted! 🙁

Anyway, on the back of my theory that the transformer in the Marshall JMP-1 may be susceptible to mains DC off-set, I designed Orion Type A, a DC filter / blocker. 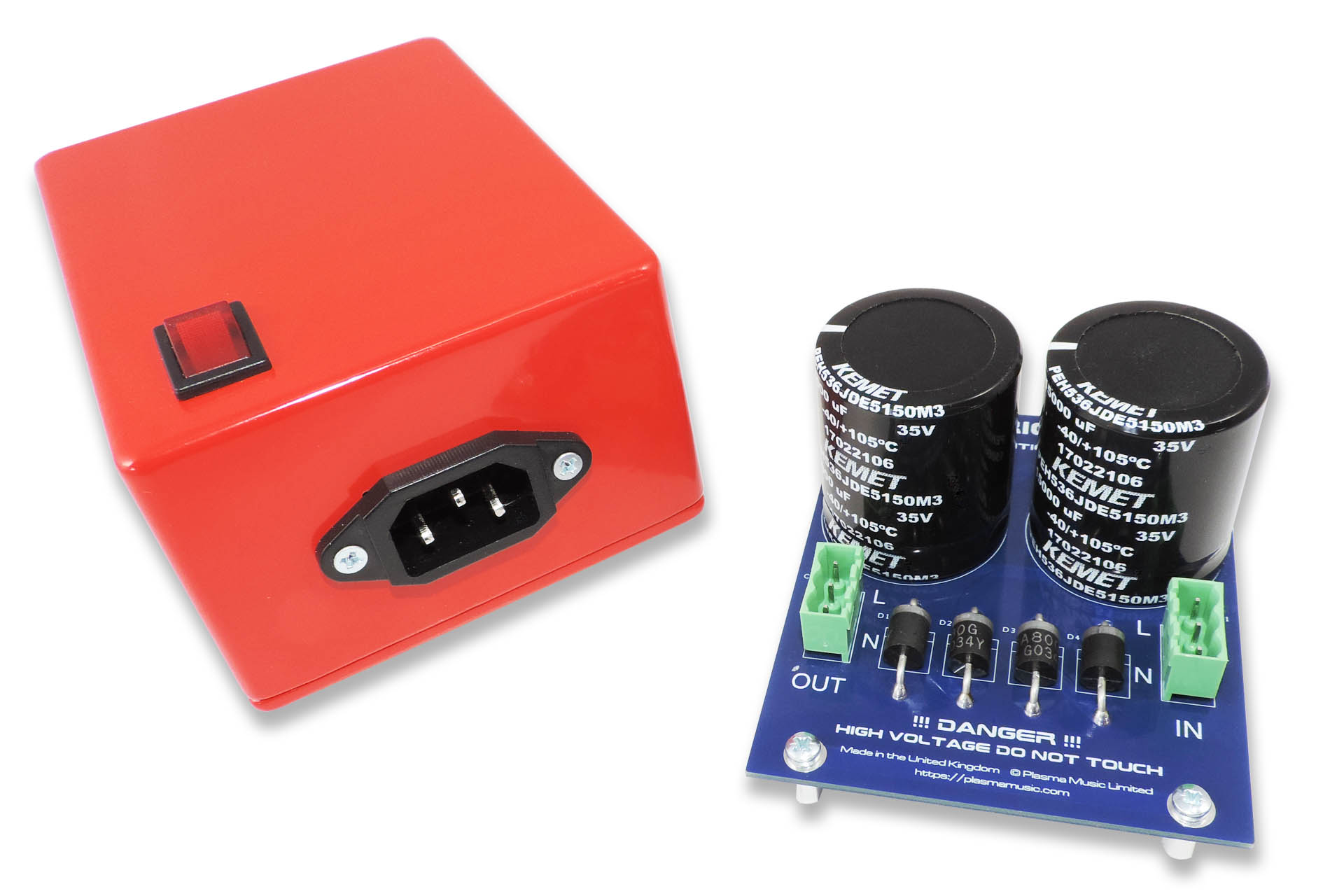 Orion worked very well and indeed does filter out DC on the mains but... I'm afraid it didn't get rid of the hum on the JMP-1.

THERE'S STILL LIGHT AT THE END OF THE TUNNEL

A few months ago, I managed to track down a chap called Graham Sopp. Graham has a company, the name of which may be familiar to some. It's called Dagnall Electronics. The reason for potential familiarity is that many of you will recognise it as being that on the side (or top) of many a Marshall transformer! That includes our beloved JMP-1's power transformer.

Well, Graham wasn't just exceedingly knowledgeable but was also very (VERY) helpful. We had some considerable correspondence over e-mails and he expressed his surprise at my theory of DC off-set being the reason behind our humming JMP-1 transformer, suffice to say his scepticism was well founded.

Anyway, Graham's suggested that I conduct a few tests and get back to him with my findings. He said there are two potential paths to follow; the first is that I return humming transformers which will have their laminations replaced and will then be re-varnished. The second is that 'we' design a new transformer using a higher  specification material for the laminates.

As I said, I really am on a mission to resolve this but please be patient. Drop in here every once in a while and I'll get back to you as soon as...

While the outputs of the Marshall JMP-1 are +4dBm line-level, they're also unbalanced, which was quite a common feature (or lack of) for the time. I spent quite a while, looking to install balanced output drivers into the JMP-1 but changing the 2-pole sockets over to 3-pole, was a major obstacle for my plans .

Today however, I released my Transformer Coupled Interface (TCI) Type 1 which is a passive stereo unbalanced to balanced line-level converter. TCI allows you to properly interface your favourite MIDI valve guitar pre-amp with your DAW or mixing desk. You'll notice the difference! 🙂

At last!!!! 😀 My PML-TX01 upgraded replacement transformer for the Marshall JMP-1 is finally here!

The laminates of the PML-TX01 are made from a higher specification material, thereby reducing hum and hence, heat generation, too.

Exactly the same size and pin-for-pin compatible with the original TXMA-00014, my PML-TX01 is a true drop-in replacement.

If you want to find out more about the JMP-1, then there's loads of resources on-line and of course there are Marshall JMP-1 groups on Facebook like this one: https://www.facebook.com/themarshalljmp1

I know this box inside-out and I absolutely love it and love working on them, so if you have a JMP-1 that's in need of a little TLC, then don't hesitate to contact me.

WARNING: Implementing this procedure will permanently delete all user-made changes to any patches. If you want to save your JMP-1's memory, do a MIDI dump first.

While you're here, you may find it useful to know how to dump the entire memory of your JMP-1 to a sequencer or sysex package like MIDI-Ox or SEND-SX.