This project has taken months but after tracking down Graham Sopp, the guy who designed the original TXMA-00014  JMP-1 transformer, I'm delighted to announce that my PML-TX01 upgraded transformer for the Marshall JMP-1 is now available, featuring laminates made with a higher quality material.

You don't need to be a rocket scientist to notice that the original transformer in the JMP-1 is not particularly stressed. Just take a peek at the regulators and you'll notice an obvious lack of heatsinks suggesting that the current draw from the supply lines is far from excessive. Measuring the input voltages to the regulators indicates that the voltage drop across them is not too much and of course we all know that the valves take very little current.

So why then, does the JMP-1 transformer get so hot?

Well, it's due to the fact that the transformer's laminates oscillate. That's right. They oscillate so much that apart from the hum, a considerable amount of heat is also produced.

I spent a lot of time looking at the mystery of the Marshall JMP-1 humming transformer, refusing to acknowledge any issue with the laminates as I just didn't want to believe it. Once the penny dropped though, it all made sense.

It took a while but my first batch of PML-TX01 transformers is now here. With considerably less hum and heat than the original Marshall TXMA-00014, I thoroughly recommend that you consider this upgrade. 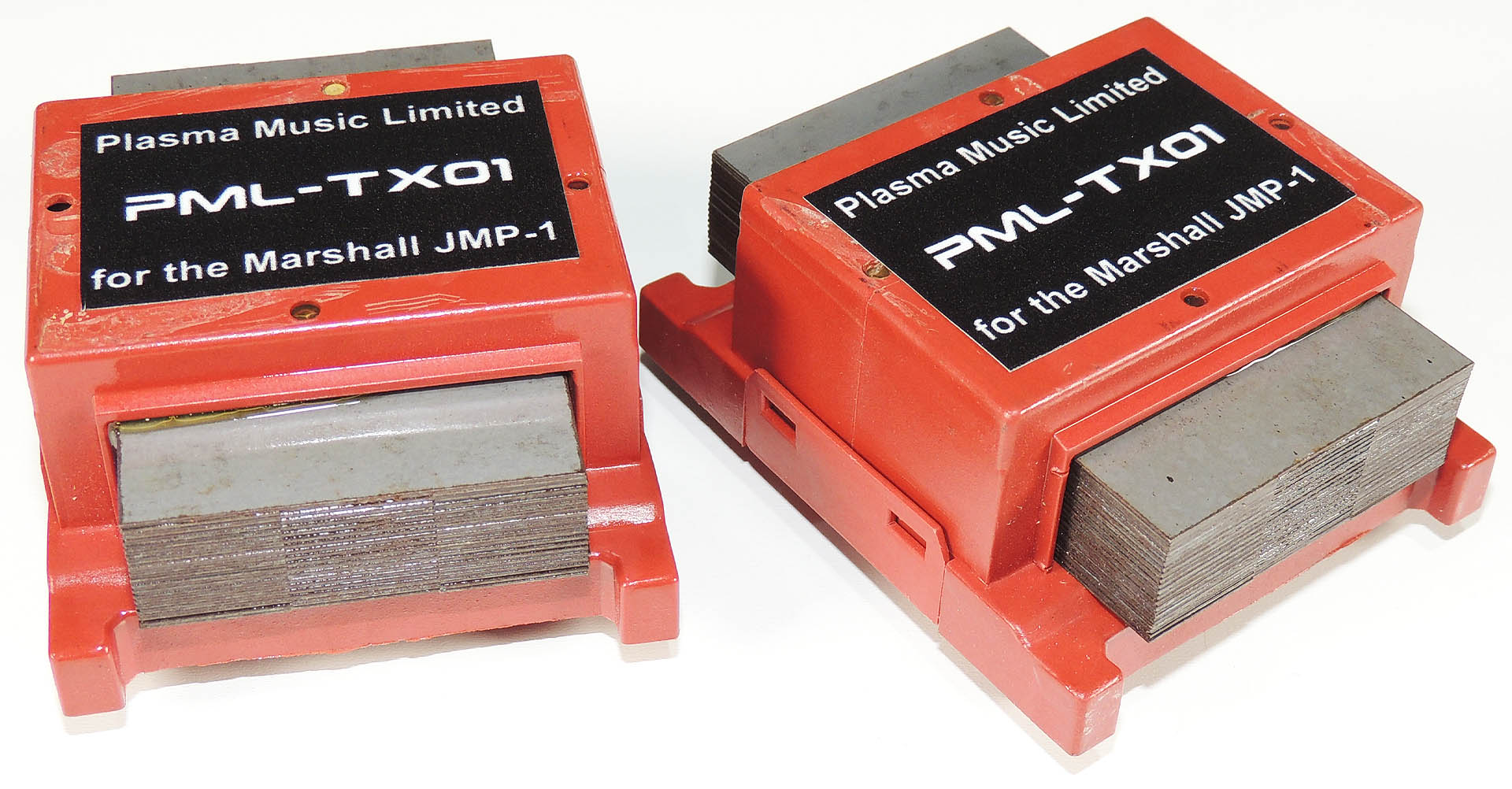 I regularly receive two questions from those interested in my PML-TX01:

The answer to the first question is, just like the original TXMA-00014, my PML-TX01 has two separate primary windings, each rated at 115V. So…

The original links were JUST WIRE LINKS, so you can use wire.

One might ask why the two individual primary windings are put in parallel for 115V. Why not just use one winding?

Well, a system uses a certain amount of power. Power is the product of voltage and current: P = V x I.

You can probably see now that if you half the voltage, you'll need twice the current to deliver the same amount of power. Placing the two primaries in parallel does just that, it doubles the current going into the system. 🙂

A WORD OF CAUTION

The transformer is soldered to the now very old, double-sided main board in the JMP-1. Please take care when removing the original transformer. It's a relatively heavy device and the through-hole plating isn't exactly the best quality. The last thing you want to do is strip it!

My PML-TX01 upgraded transformer for the Marshall JMP-1 is a high specification replacement for the original TXMA-00014 only. It is NOT suitable for other pre-amps such as the Marshall 9001.

If you have any questions about my PML-TX01, please don't hesitate to contact me or you can just